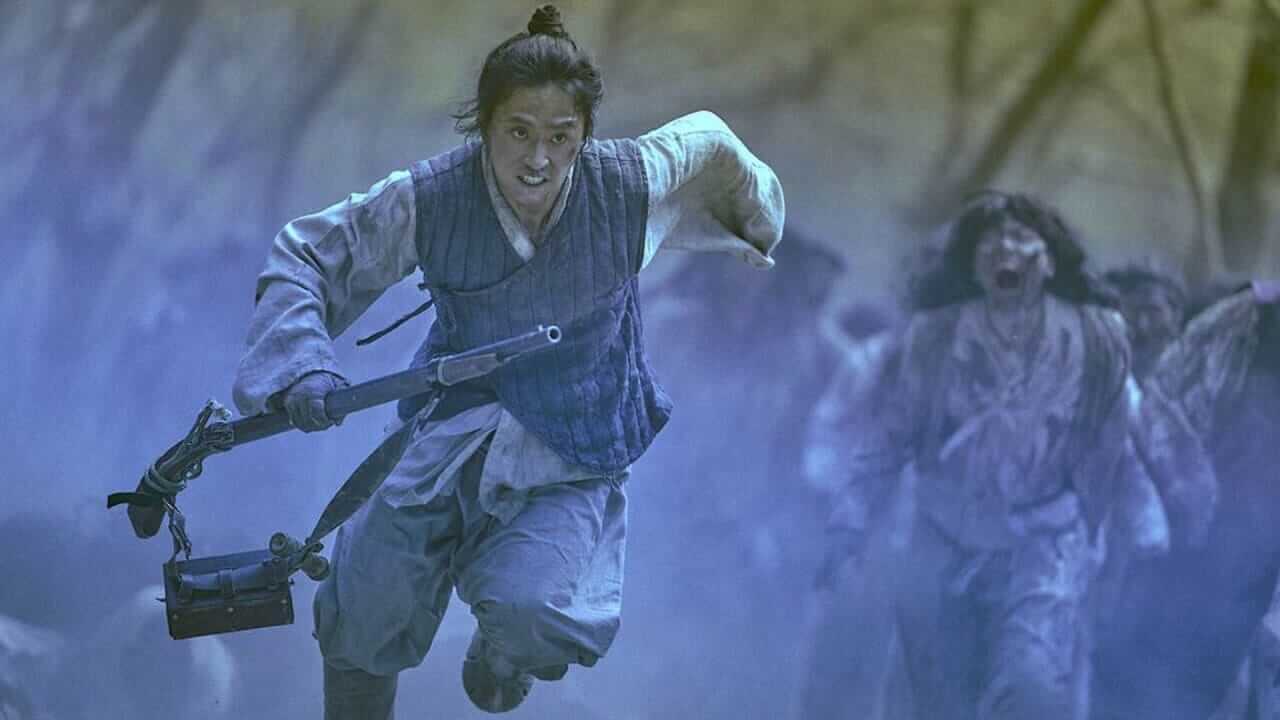 From the moment I knew Kingdom, I had already come to the conclusion that I would like this show. You could say it was the easiest foresight I have ever had. I voraciously feasted on episodes of the epic zombie drama and at the end of it all I wanted was more. Once the credits rolled out as the finale drew to a close, I realized that Kingdom was one of the best TV shows I have seen. Here’s why Netflix Kingdom is the best zombie series yet.

Kingdom is a Netflix Original zombie thriller based on the webcomic Kingdom of gods by creator Kim Eun-hee. In an incredibly short span of time, the series has already become one of the best titles on Netflix and a personal favorite. Suffice to say that I am impatiently awaiting the release of the second season!

During the Joseon period in Korea, Crown Prince Change is caught up in a political plot and is forced to flee the capital. After his investigation of the man who cared for his father, the King, Chang’s mission quickly turns sour when he learns that the doctor’s work has led to the creation of a mysterious plague that resuscitates the dead. As the carnivorous epidemic threatens the country, the crown prince must unite the people and save Korea.

Kingdom: A new take on an old concept

Now, before I spam the comments, I understand that speedy zombies aren’t a new concept in the genre. The reason I classify Kingdom zombies as â€œfreshâ€ is because of their behavior and what makes them tick. New ideas for zombies are rare, the most common being the classic slow-paced Romero zombies or “Oh shit, they’re running!” You might as well die! zombies. While KingdomFlesh eaters fall for the latter, it’s the little things that make them incredibly fresh.

At the resurrection, the way the zombies moved was amazing. The creaking of the bones, the dead hollow eyes and the ravenous hunger they manifested were terrifying and I loved it. Now, there was a discrepancy with how quickly (or lack thereof) humans transformed when bitten, but I just attribute that to the fact that each person has their own makeup. Anyway, once bitten, you would either turn around or be eaten …

The idea of â€‹â€‹making zombies look like they are nocturnal was just great. Watching the zombies run away like ants when the sun rose was fantastic and left me with so many questions. All I wanted was to see more. It also gave the audience a break and time to breathe while still allowing the story to continue. Not to mention the fact that our heroes could be surrounded by them and not even realize it until it was too late added to the tension.

If you’ve ever seen the finale, you know the zombies of Kingdom are not really nocturnal. They are indeed very sensitive to the heat of the sun and only “resuscitate” if the temperature is cold enough. Not only was it a brilliant twist, but it certainly added an incredible amount of tension to the final moments of the first season.

Throughout the season, it was noticed that winter was fast approaching due to the condensation on the breath of the characters. With the plant that can only grow in the “Frozen Valley”, everything clicked to explain why zombies hated the sun. There aren’t many headlines that reveal the origin of the virus, but it has worked flawlessly in history.

Throughout the season, there have been some amazing photos from the Korean countryside that highlighted how beautiful the country of South Korea is. Even when the characters were just traveling, the way it was shot was amazing. The size and scope of the money invested in the series is evident throughout. Every Won spent to go over budget was worth it for the show we got.

The sets and costumes

From the shanty towns of Dongnae to the Hanyang Palace, every decor has been treated with incredible detail. It really made it evident throughout history to see the difference between peasants who lived in poverty and nobles who led luxury lives. For sets involving zombies, the destruction caused by the living dead was nothing short of spectacular. Not to mention the magnitude of the threat the undead faced was matched by the defenses of the living.

I’m definitely not an expert on Korean history, so when it comes to historical accuracy, I don’t know how Kingdom accomplished. What I do know is that the costumes and the grandeur of the nobles and ladies were amazing. Once again, unlike the rags of the peasants, it was expressed how separated they were by their society. Not that the zombies cared about a person’s social status. In the end, the dead do not discriminate.

There were spectacular shots where the zombies tore their victims apart. My favorite was the Female Doctor who was torn to pieces as the zombies crowded around her body to the point where she was lifted into the air as they tore at her flesh. Aside from the feast of flesh, the design of the zombies themselves was amazing. The way they moved in packs during the chase scenes was brilliant, and during the many close-ups of said zombies, they were truly a sight to behold.

The subplot to Kingdom involved a political game between Crown Prince Chang and the Cho clan. It was a constant reminder of the threat Chang faced from humans and not just zombies. The prince’s subsequent actions resulted in the leader of the Cho clan seizing power and using his daughter as a puppet queen. Following the death of her son at the hands of the Changs, Cho’s last hope for her family’s legacy is the birth of a son by the Queen.

Meanwhile, the Queen was scheming behind her father’s back as she faked her pregnancy. Why is this important? Because the crown prince is the king’s illegitimate heir. Chang’s mother was not the first queen but is still the heiress if no legitimate male is born. Therefore, if the queen cannot produce a male heir, the throne rightfully belongs to Chang. To secure a male heir, the Queen’s plan is to steal a baby boy from the group of pregnant women she has “generously” helped.

Chang has the support of the people and important nobles. It will be for nothing if they cannot defend themselves against the horde of zombies. Aid will not come from the capital as Cho has surrounded the area with men from the Five Armies. To whom the doors of the regions have been closed and will be well defended against zombies.

There was a moment that made me realize how Kingdom is and that was during the third episode. This happened during the Dongnea Chaos as zombies were invading the town. During the attack, a mother was trying to hide her daughter from zombies. Disobeying her mother who told her to hide, she was almost seen. Suddenly the girl’s sister arrives and prevents the mother from finding the first baby girl. The sister immediately becomes zombie food, and her mother’s screams pierce the night. Thanks to the distraction, the girl is barely alive.

It’s certainly not the first time that kids have been used in a zombie title, but when used effectively it hits you deeply and it’s a limit that isn’t often pushed back. Another amazing moment was when a young mother was trying to get to safety to get caught by zombies. As her legs were mercilessly shredded, she was able to get her baby to safety before being dragged into the horde below and feasting.

The origin of the virus

Usually, the origin of the virus is not explored in most zombie titles. For Kingdom, it makes perfect sense to explore how the virus came about.

What’s most interesting is the fact that the one the king feeds on doesn’t turn into a zombie. The proof was the shock of the doctor who resuscitated the king. The young man who was first torn apart by the king never turned into a zombie. The subsequent ladies of the court who were fed to the king also never looked back. It wasn’t until the young man’s body was given to the starving residents of Jiyulheon that the virus was then passed on to those who ate infected meat.

So why do I think Kingdom is the best?

You know a show is amazing when you have to remember you’re watching a show, not a movie. The only shows to make me feel this way were Game Of Thrones and Band of brothers and right now I’m running Kingdom up there as one of the best shows I’ve seen in an amazingly long time. Season 1 is only the first half of this show and I’m already talking about how awesome it is. Imagine how I will feel once the second season is released!

The elephant in the room is the fact that Kingdom went well over the production budget for Season 1. By the end of production, each episode cost over $ 1.78 million. But since every episode of The walking dead costs over $ 3 million to produce, you must be wondering how can a show be so boring and yet spend so much money? Kingdom managed to tell a compelling story in more than half the time that The walking dead To. So during The walking dead gets four “good” episodes per season, Kingdom has six.

Everything I discussed above created a much more entertaining tale than The walking dead Where Nation Z. I felt the series was on a whole new path that other creators need to explore. The kingdom has never bored me. Too often in The walking dead (not really Country Z), the story got tedious, and the plot threads came to disappointing conclusions. The rhythm of Kingdom was fantastic. It was slow and methodical when needed and it was a master class to build tension.

What are your thoughts on Kingdom? Let us know in the comments below!