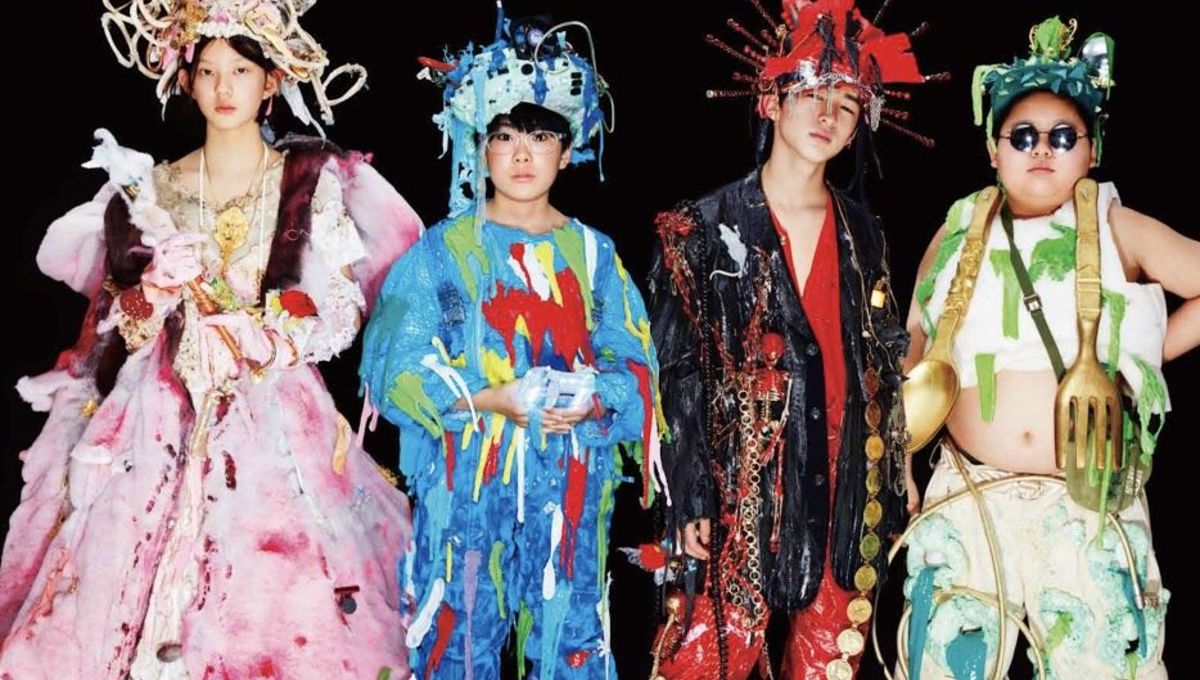 Forget the eerie graveyard plans, horror, blood and guts that a zombie movie usually involves. Despite its biting title, We are little zombies is not a terrifying story of the living dead or a dangerous virus wiping out mankind. Instead, it’s an idiosyncratic coming-of-age tale about four Japanese orphans who feel numb over the death of their respective parents. Feeling dead inside, they form a gang of “little zombies” and go viral when their titular hymn of apathy hits the airways. So in a metaphorical meaning, this is a zombie movie. But above all, it’s a weird and wonderful adventure on how video games provided the key to a seemingly numb boy who unleashes his true feelings.

Written and directed by Makoto Nagahisa, We are little zombies focuses on Hikari (Keita Ninomiya), a schoolboy who can’t bring himself to cry when his parents are killed in a bus crash. As others at their funeral cry and twist their faces in huge expressions of grief, her face is as placid as a lake. The same is true of the three other orphans he meets while waiting for the corpses of their parents to be cremated in the crematorium. As smoke billows above them from a giant fireplace, there is a moment of shock when this eccentric quartet realizes that they have no relatives to return to, and then an explosion of celebration, because no parents means no rules! While We are little zombies unfolds stories that include poverty, abuse, suicide, murder, and a pedophile piano teacher, its tone is kept light by an irreverent spirit combined with a distinctive visual style that makes even the most disturbing elements playful.

Beneath their stoic exterior, these children are, of course, dealing with trauma in every way they can. For Hikari, that means seeing her emotional journey as the quest for a video game. A lonely and introverted boy, his parents gave him video games for companionship. Some might suggest that this intense exposure to video games desensitized the boy or broke his grip on reality. But by putting We are little zombies In Hikari’s obsessed video game perspective, Nagahisa explores how these games encourage a child’s imagination and provide a crucial tool for coping.

The visuals of We are little zombies 8-bit video games of the 70s and 80s were born. In voiceover, Hikari welcomes us to the prologue, where a pixelated title card appears that translates to “Why I couldn’t cry at my family’s funeral. parents”. The accompanying sound effects sound like the little explosions of Space invaders. There will be title cards throughout, serving not as chapter titles but as an introduction to the “stages” of Hikari’s game. When the title card of We are little zombies appears, a blossoming of music that seems plucked from Nintendo’s early days and an invitingly flashing “start” icon. It is as if the spectator presses a button to play the game.

Next comes an animated sequence that turns our orphans into 8-bit heroes crossing levels of tombstones, televisions, stairwells, burning houses, and increasingly surreal storylines. So their real adventure begins. Returning to the live action, the zombies must acquire tokens from their old homes without being captured by affected adults. As the four children roam the city, aerial photos of their trip are reminiscent of the Nintendo original The Legend of Zelda. When they each snatch a personal token (a Game Boy-type device, a bass guitar, a wok), a video game sound effect sounds, celebrating the acquisition of a special item. The film’s soundscape is littered with sound effects like this, giving Hikari’s world an element of whimsy it needs to keep grim reality at bay. Likewise, the soundtrack is alive with small electronic tunes reminiscent of the first arcade games. This is the world where Hikari feels right at home, and by finding a group to play along, he finds a community to help him heal.

With the quest to reach the special objects achieved, the quartet forms a rock band. Each token is related to their parents’ tragedy and each gives them a way to sing it. Hikari’s Game Boy provides the basic chanting rhythms as he sings. Ishi (Satoshi Mizuno), whose parents died in a restaurant fire, hits their wok like a drum. Takemura (Mondo Okumura), whose last moments with his abusive father were marked by his older brother’s band, plays a volley bass, while Ikuko (Sena Nakajima) uses piano techniques taught to him by the creeper / aforementioned professor. With the pain and the special items combined, they released the title song, “We Are Little Zombies”. Although most of it is in Japanese, the chorus is in English and terribly catchy. It’s gonna get stuck in your head like the theme to Super Mario Bros., appearing when you least expect it, and looping for days afterward. It’s no wonder, then, that the zombie song is becoming a big hit in the film world, propelling them to stardom and hunting them down in weird storylines like Harajuku makeovers, goofy talk shows and press interviews. intrusive.

It is during an interview that Hikari expresses the most emotion at the disappearance of his parents. Though his tone is still flat, his eyes still blank, his words reveal the great pain that swells beneath the surface. When asked what he would do if he met the bus driver responsible for his parents’ deaths, he confesses that he craves revenge, noting, “He’s the end-of-level boss in the game. game of my life. ” Corn We are little zombies does not prepare us for a confrontation between a traumatized boy and an unhappy bus driver. Instead, Hikari and his party mates will once again break the adult rules, for one final quest that they hope will see them shut down.

In the penultimate stage, “Zombie Station,” the kids laugh as they sprint through a train station, dodging guards and dodging the mass of slow-moving commuters looking at their phones. It’s fun, but this footage also shows how the kids have grown up already. They are no longer the zombies in this movie. They feel love for each other and have fun in front of the buzzing adults who sleepwalking throughout their lives. But in the final phase, Hikari has to face what he lost. There will be no fights to be won. No bosses to defeat. No member of the group to hide behind. Hikari has to face his feelings himself. And in doing so, provides a life lesson â â€” or a cheat code â â€” for the rest of us who might fear emotions: the only way to win is to play the game. The only way out is to pass through.

In all, We are little zombies is a trippy, nostalgic adventure that mixes weak elements of zombie horror with old-school video game tropes, then weaves the two into a particularly poignant coming-of-age story. While little zombies pretend to feel nothing, we feel for them. We root for them. And we sing their song, because who among us hasn’t felt a little zombie sometimes?

Video of “WE ARE LITTLE ZOMBIES” official trailer

We are little zombies made its Canadian premiere at the Fantasia International Film Festival.