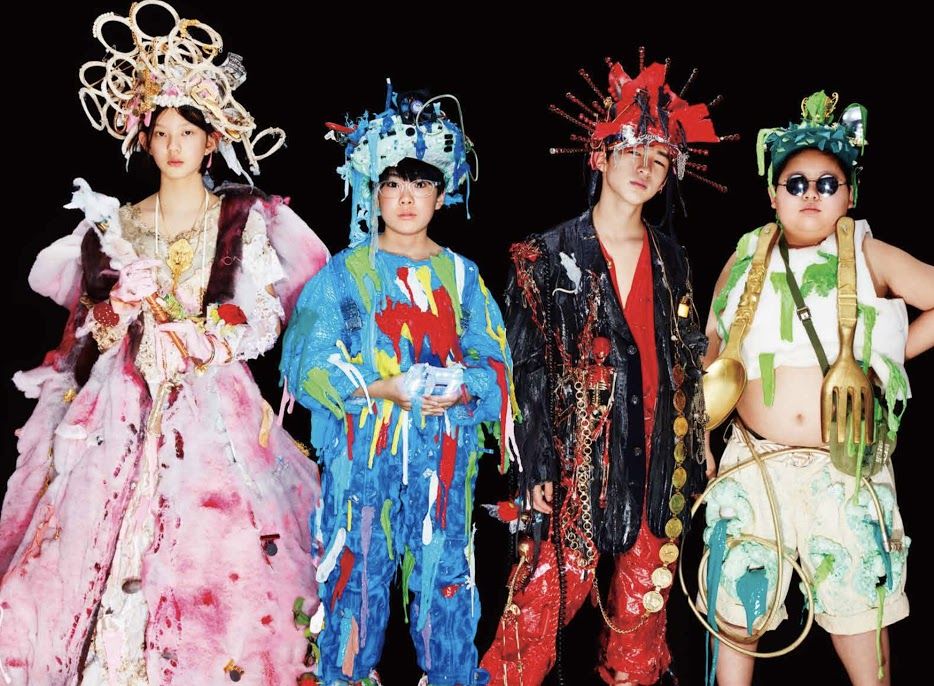 Forget the ominous graveyard shots, horror, gore, and innards that a zombie movie usually entails. Despite its biting title, We are little zombies is not a terrifying tale of the living dead or a dangerous virus wiping out humanity. Instead, it’s an idiosyncratic coming-of-age tale about four Japanese orphans who feel numb to the deaths of their respective parents. Feeling dead inside, they form a band of “little zombies” and go viral when their titular anthem of apathy hits the airways. Thus, in a metaphorical meaning, it’s a zombie movie. But above all, it’s a weird and wonderful adventure about how video games provided the key to a seemingly desensitized boy unlocking his true feelings.

Written and directed by Makoto Nagahisa, We are little zombies centers on Hikari (Keita Ninomiya), a schoolboy who can’t bring himself to cry when his parents are killed in a bus accident. While others at their funeral weep and twist their faces into huge expressions of grief, her face is as placid as a lake. The same goes for the three other orphans he encounters while waiting for their parents’ corpses to be cremated at the crematorium. As smoke billows above them from a giant chimney, there’s a moment of shock when this eccentric foursome realize they have no relatives to come home to, and then an explosion of celebration, because no parents means no rules! While We are little zombies unfolds stories that include poverty, abuse, suicide, murder and a pedophile piano teacher, its tone is kept light by an irreverent wit combined with a distinctive visual style that makes even the most disturbing elements playful.

Beneath their stoic exteriors, these children are, of course, dealing with trauma in every possible way. For Hikari, that means viewing her emotional journey as a video game quest. A solitary and introverted boy, his parents gave him video games for company. Some might suggest that this intense exposure to video games desensitized the boy or fractured his grip on reality. But by putting We are little zombies In Hikari’s video game-obsessed point of view, Nagahisa explores how these games encourage a child’s imagination and provide a crucial tool for coping.

The visuals of We are little zombies were born from the 8-bit video games of the 70s and 80s. In voiceover, Hikari welcomes us to the prologue, where a pixelated title card appears that translates to “Why couldn’t I cry at my parents’ funeral “. The accompanying sound effects resemble the metallic explosions of space invaders. There will be title cards throughout, serving not as chapter titles but as an introduction to the “stages” of Hikari’s gameplay. When the title card of We are little zombies appears, a fanfare of music that seems culled from the early days of Nintendo’s shards, and a “start” icon flashes invitingly. It is as if the spectator presses a button to play the game.

Next comes an animated sequence that transforms our orphans into 8-bit heroes traversing levels of tombstones, televisions, stairwells, burning houses, and increasingly surreal scenarios. Then their real adventure begins. Back to live action, the zombies must acquire tokens from their former homes without being captured by concerned adults. As the four kids roam the city, aerial footage of their trip is reminiscent of the Nintendo original The Legend of Zelda. When they each grab a personal token (a Game Boy-like device, a bass guitar, a wok), a video game sound effect plays, celebrating the acquisition of a special item. The film’s soundscape is littered with sound effects like this, giving Hikari’s world an element of fantasy it needs to keep grim reality at bay. Likewise, the soundtrack is alive with the tiny electronic tunes reminiscent of early arcade games. This is the world Hikari feels comfortable in, and by finding a group that plays along, he finds a community to help him heal.

With the quest to achieve the obtained special items, the quartet forms a rock band. Each token is tied to their parents’ tragedy and each gives them a way to sing about it. Hikari’s Game Boy provides the basic chirping beats as he sings. Ishi (Satoshi Mizuno), whose parents died in a restaurant fire, bangs their wok like a drum. Takemura (Mondo Okumura), whose final moments with his abusive father were marred by his older brother’s band, plays a stolen bass, while Ikuko (Sena Nakajima) uses the piano skills taught to him by the aforementioned creeper/professor. With pain and special items combined, they dropped the title track, “We Are Little Zombies.” Although most of it is in Japanese, the chorus is in English and terribly catchy. It’s gonna get stuck in your head like the theme of Super Mario Bros., appearing when you least expect it and playing on repeat for days after. It’s no wonder, then, that the zombies’ song became a big hit in the film world, propelling them to stardom and chasing them into bizarre storylines like Harajuku makeovers, goofy talk shows and press interviews. intrusive.

It is during an interview that Hikari expresses the most emotion in the face of the disappearance of her parents. Though her tone is still flat, her eyes still blank, her words reveal the great pain swelling beneath the surface. When asked what he would do if he encountered the bus driver responsible for the death of his parents, he confesses that he is thirsty for revenge, noting, “He’s the end-of-level boss in the game of my life.” Corn We are little zombies does not prepare us for a confrontation between a traumatized boy and a hapless bus driver. Instead, Hikari and her bandmates will once again break the adult rules, for one last quest that they hope will earn them closure.

In the penultimate stage, “Zombie Station,” the kids laugh as they sprint through a train station, dodging guards and dodging the mass of slow-moving commuters staring at their phones. It’s fun, but this sequence also shows how the children have already grown up. They are no longer the zombies of this film. They feel love for each other and have fun with the buzzing adults who sleepwalk through their lives. But in the final stage, Hikari must come to terms with what he lost. There will be no fights to be won. No bosses to defeat. No party member to hide behind. Hikari has to deal with his feelings himself. And in doing so, provides a life lesson ⁠—or a cheat code ⁠— for the rest of us who might fear emotions: the only way to win is to play the game. The only way out is to pass through.

In all, We are little zombies is a trippy, nostalgic adventure that blends weak zombie horror elements with old-school video game tropes, then weaves the two together into a uniquely poignant coming-of-age story. While the little zombies pretend to feel nothing, we feel for them. We root for them. And we sing their song, because who among us hasn’t felt a little zombie sometimes?

We are little zombies had its Canadian premiere at the Fantasia International Film Festival.