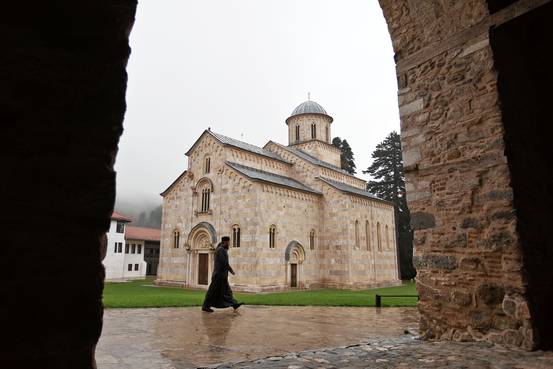 In rare good news for an otherwise devastated region, Kosovo signed a stabilization and accession agreement with the European Union last month, bringing the country closer to EU membership. It was an encouraging victory for young Western-trained Kosovo diplomats. But not two weeks later, the country suffered a most demoralizing defeat when Russia and Serbia succeeded in canceling Pristina’s candidacy to join Unesco.

In fact, Kosovo won 93 votes to 50, but it lacks three votes from the two-thirds majority required to become a member. The Serbian “victory” was a classic example of a nose cut against his face, as the main Unesco heritage sites in Kosovo are the churches and monasteries considered to be the cradles of the Serbian Orthodox faith. Placing them under the control of the United Nations would have given Belgrade a voice over their status. But for Belgrade diplomats, scoring points against Kosovo is more important.

Such is the chaos of the Western Balkans. Sixteen years after the fighting ended, the region remains Europe’s zombie zone, where the dead count more than the living and living in the past is more important than working for a better future. There is no real stability, rule of law or positive economic outlook for the citizens of the region.

A September 2015 International Monetary Fund report indicates negative growth for the region. Serbia has had a negative birth rate since 1992, with the Serbian population falling by 400,000 since 2000. Since the financial crash, 180,000 Greek graduates have left the region. The IMF reports unemployment rates of up to 50% for the Western Balkan states.

It is not only the bitterness left by Milošević’s decade of war in the 1990s that is at the origin of this division. States refuse to cooperate, recognize each other or open borders to trade and investment like their northern European neighbors.

Between the Serbs and the Bosnians and Croats, there is no further detente even 20 years after the Srebrenica massacre. Serbia refuses to recognize Kosovo. Slovenia erected a fence on its border with Croatia, and these are the two lucky states that entered the EU out of the six that emerged from the former Yugoslavia. The other four, Bosnia, Kosovo, Macedonia, Montenegro and Serbia, are still waiting.

And so you have a situation like the recent EU summit on Western Balkan immigration, where Greece would not speak to Macedonia of the proper name of the former Yugoslav republic and continue to refuse to open an embassy in Pristina. And Serbia would not speak in Kosovo, which Belgrade sees as a separatist province that will one day be restored. It is highly unlikely that states in this besieged region will learn to cooperate, to exchange intelligence on refugees and human traffickers, or to initiate joint police and border patrol operations.

This is a problem that the Balkans must resolve among themselves. Until they do, neighboring countries will continue to view them with great suspicion. Hungary has already erected a fence on its border with Serbia, not trusting the Serbs to slow the flow of refugees and economic migrants. Meanwhile, the Balkan states simply want to pass the problem on to German Chancellor Angela Merkel and the prime ministers of the wealthier states in the EU.

Worse yet, in the EU, Cyprus, Greece, Romania, Slovakia and Spain even refuse to recognize Kosovo. They can all find local reasons: Spain is worried about Catalan independence; Romania and Slovakia do not like Budapest’s claim to speak for the Hungarian minorities within their borders; Greece and Cyprus are influenced by the Orthodox Church’s ties with Serbia.

But the end result is that the EU, so often eager to lecture the world on solving foreign policy problems, seems pathetic in its inability to achieve mutual recognition for a small nation an hour’s flight away. Athens or Bucharest.

And so it is not only refugees from the Middle East who bypass the region on the path to safety and freedom. Given the desperate situation in the Western Balkans, a mass movement of vigorous young people have also voted with their feet as they head north for better economic opportunities. If the region’s politicians want the best and brightest in their countries to work at home, they must learn to cooperate and help their states grow together.

For starters, more mature European powers could tell smaller EU members that they are not full members of the foreign policy club until Kosovo is recognized. Brussels, and more importantly Britain, France and Germany, should also make Belgrade understand that without accepting Kosovo’s independence, Serbia’s chances of entering the EU are non-existent.