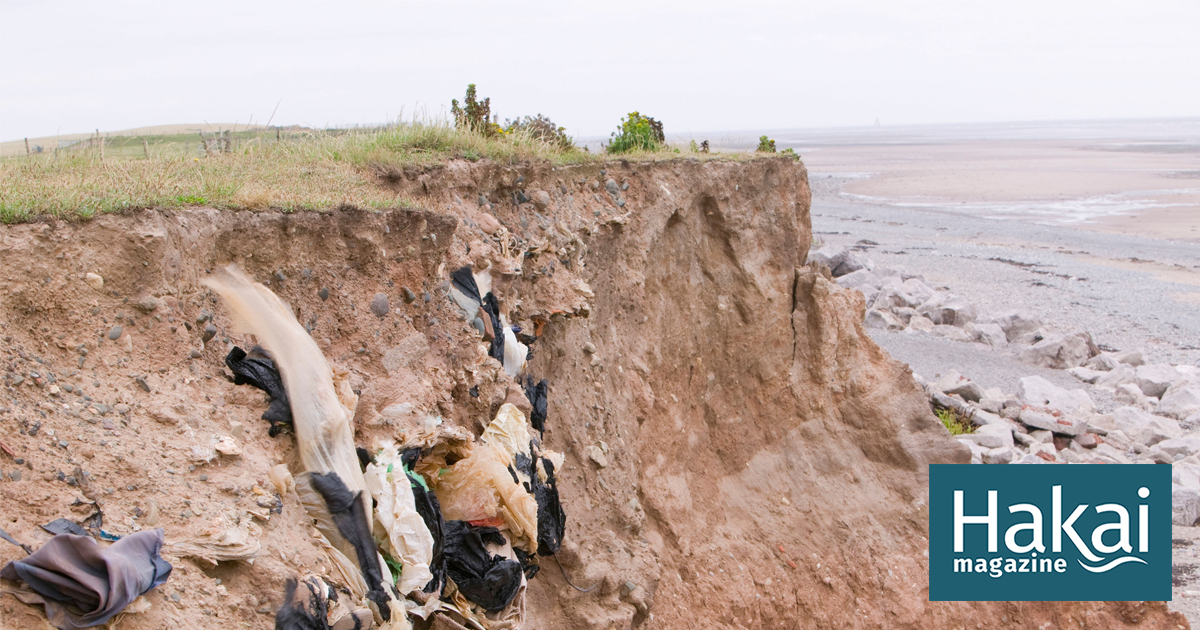 In the early 2010s, rubbish began to fall from the sand dunes in Lingreville, France. Beset by chronic coastal erosion, a long-forgotten landfill spewed its rotting treasure into the ocean. In 2016, a powerful storm carved out the site. The following year, cleanup crews removed 14,000 cubic meters of sand mixed with rubbish, including asbestos, from the site. Now researchers are warning that coastal communities around the world are on the verge of a similar fate, with destabilized landfills set to dump vast amounts of waste into the ocean.

For decades, humans have been throwing everything from hazardous industrial waste to household trash into landfills. Landfills were originally thought of as eternal dumping grounds that could hold waste forever. It didn’t take long for environmental concerns to arise, and today legislation often dictates what can and cannot be thrown in a landfill. But the vast majority of landfills predate these rules. And with rising sea levels causing more extreme erosion, flooding and storm surges, we’re on the verge of finding much of that waste.

Robert Nicholls, a climate adaptation expert at the University of East Anglia in England, worries that people are underestimating the amount of waste that could be dumped by degraded shorelines. To demonstrate the true extent of the problem, Nicholls and his colleagues analyzed existing landfill data in Europe and Florida – a state set to lose huge swaths of its land area over the next century – to show the large number of historic landfills located precariously close to the rising ocean.

Their research shows that in France, for example, the 1,000 municipalities located near the coast each have at least one landfill. The Netherlands has between 4,000 and 6,000 old landfills. With a third of the country below sea level, most Dutch landfills also lie partly below sea level. (Although, like the rest of the country, they are hidden behind extensive flood defenses .) In Florida, the team estimates there are 1,099 landfills at risk of flooding.

Several of these coastal points have already begun to degrade. In 2008, a 400 meter long cliff collapsed near Lyme Regis on the south coast of England. Since then, lead, polycyclic aromatic hydrocarbons and asbestos have all been found in nearby sediments. Unlike Lingreville, the cliff near Lyme Regis is too unstable to search. Instead, people cleaned up the trash as it fell. The approximately 50,000 tons of waste seem destined to erode into the ocean. It is just one of some 1,200 historic landfills in England that lie in the tidal flood zone, usually close to estuaries, towns and industrial centres.

In Florida, the story is similar. The researchers found that 420 of the 1,099 landfills are at high risk of erosion and flooding, while 592 are at moderate risk. By 2100, if sea level rise reaches the upper limit of projections, the number of landfills in the floodplain could nearly double to 1,869.

Nicholls says it’s not a problem that’s going to cause catastrophic problems tomorrow. Like a leaky pipe hidden in a wall, he thinks it’s more of a “drip, drip problem” that will cause big problems in the long run if ignored. He says landfills need to be assessed and their management prioritized.

When it comes to dealing with problematic landfills, Nicholls says there are basically three approaches: dig them up and move them, protect them, or just dump them in the ocean. Part of deciding which way to go depends on understanding the nature of the waste.

“In Victorian times, a lot of the waste was basically bottom ash from coal fires,” says Nicholls. “It’s probably quite benign household waste. As you go it changes in nature and you get a lot more plastics and things like that.

Adam Jarvis, an environmental engineer at Newcastle University in England who was not involved in the study, agrees that risk assessments are needed. “Pragmatically we have to do this,” he says, because we cannot realistically protect every coastal landfill from the onslaught of sea level rise. “The most important thing is to have this priority based on sound science, so there is a very clear rationale for prioritizing one site over another.”

Yet municipal waste isn’t the only legacy waste we need to worry about, Jarvis adds. In many coastal areas there are also piles of waste from mining, steelmaking and other industrial activities.

In effect, the Union of Concerned Scientists warned last year that along the east coast of the United States and the Gulf of Mexico, there are approximately 2,000 hazardous waste sites – commonly referred to as Superfund sites – within 40 kilometers of the ocean. At least 800 of these are at risk of extreme flooding over the next 20 years, even with low rates of sea level rise.

“The problem is probably even bigger than you imagine,” says Jarvis.