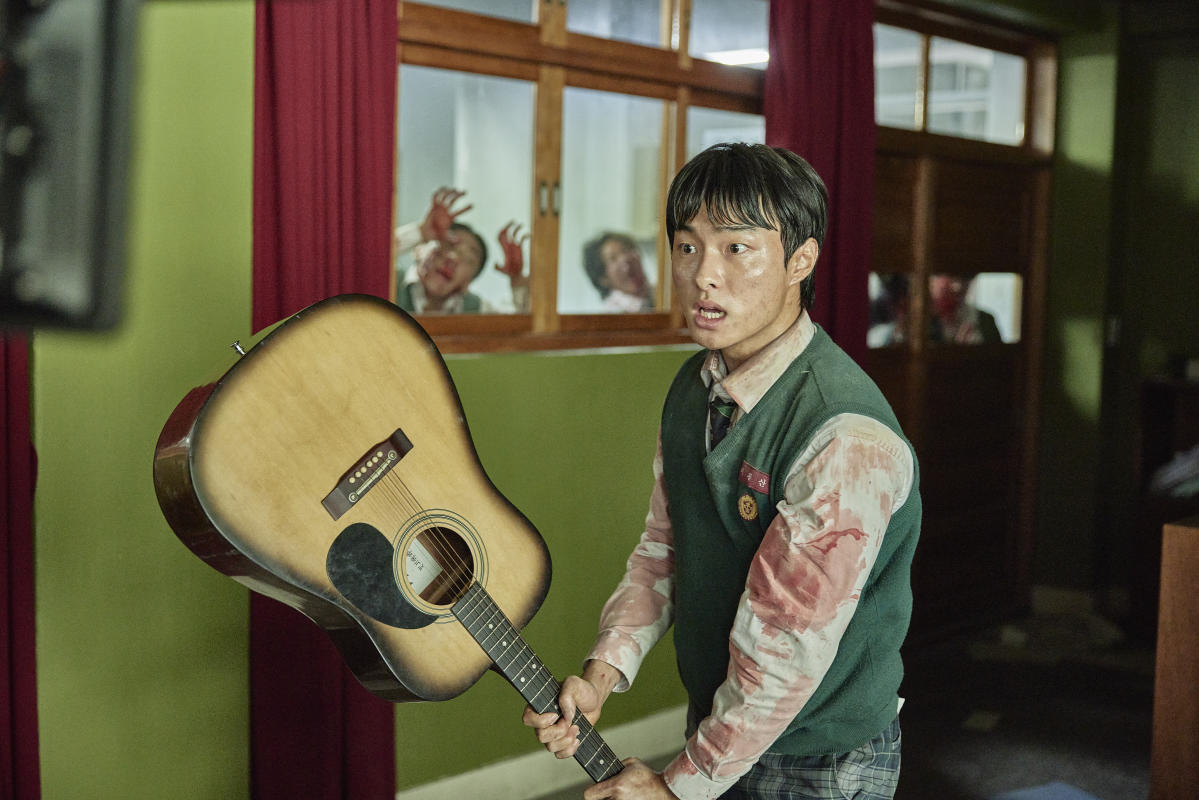 The walking dead take over the world of K-drama with Netflix’s latest thriller, All Of Us Are Dead, set in a high school that becomes ground zero for a zombie virus outbreak.

We caught the 12-episode series ahead of its Friday, January 28 release and found the concept similar to another zombie drama Happiness, released last November. Here’s how:

1. Both depict the zombie apocalypse as a virus outbreak.

When Happiness described the zombie apocalypse as a virus outbreak, much like the coronavirus pandemic, it was refreshing and intriguing. The measures taken in the drama, such as limiting movement and quarantining, were also relevant.

If Happiness is like a contained version of a pandemic, All of Us Are Dead is the chaotic, unbridled pandemic. It doesn’t take long for the virus to spread like wildfire and turn the school into a living hell, which may excite horror and thriller fans.

2. Zombies in All Of Us Are Dead are more aggressive.

The infected in bliss uniquely switches between being a human and a zombie, like a fever starting and waning. Much like how fever can be treated, these “zombies” can also recover from infection.

However, the infected in All Of Us Are Dead, like in regular zombie thrillers, completely lose their humanity and violently attack any human being. Gushing blood and revolting wounds are regularly featured – it’s not for the faint hearted!

The virus is described as a parasite that fights to take over a human body, killing every cell in the body. Yet, at the same time, this virus has the ability and potential to mutate, complicating the story. The mutated strain even imbues those infected with an outrageous form of superpower that at one point seems ridiculous, possibly due to poor storytelling.

3. The military enforces martial law in both dramas.

Martial law is an extreme last resort that allows the military to monitor the outbreak. With martial law in place, every military decision is final; there is no room for discussion. While the military plays a relatively more crucial role in Happiness, its inclusion in All Of Us Are Dead feels rather superficial.

It could have been better if they showed how they help students escape from their deadly school. Instead, the military, who should know everything, or at least try to figure it out, seem just as confused and clueless as everyone else. They didn’t even know they should check the school (ground zero) for survivors until someone called them back! God knows where they sent their rescue helicopters, which seem to be hovering far from the school.

4. All Of Us Are Dead is a monotonous survival game.

While the story of Happiness is engaging and keeps audiences coming back, the story of All Of Us Are Dead falls far short of that. In addition to the incompetence of the army, there is no clear path for the survivors to follow. They basically run from room to room, battling problems as they arise, with no final destination in mind.

Throughout all of the incidents, they seem to gain no knowledge or skill on how to kill zombies, showing minimal or no character development. Repeatedly, you’ll see them congregate in a room for a brief safe period, until a trigger sends them frantically scurrying to another location like headless chickens.

The lack of personalities in the group and weak attempts to include romance and issues such as bullying, social inequality, blackmail and teenage pregnancy also do not help to advance or improve the game. ‘story. But if you just love the gore and thrill of swarming zombies, All Of Us Are Dead might be the show for you.

Get more TV and movie news from Yahoo Life at our Entertainment page.