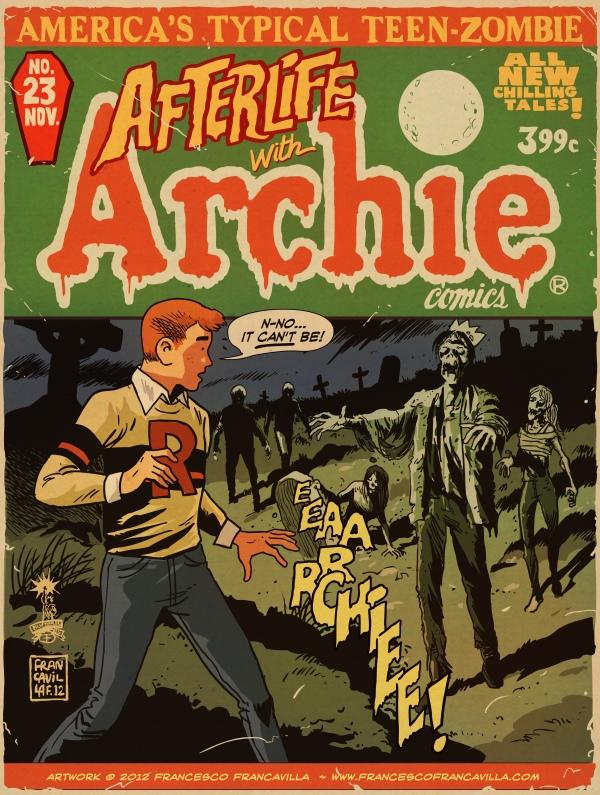 Hope you are reading the best zombie cartoon. No no The walking dead. Not the rural black The comeback. Not even the weird guilty pleasure that is Zombie tramp.

I’m talking about The afterlife with Archie, who has just completed his first arc. (The collection will be released in June.) Writer Roberto Aguirre-Sacasa and artist Francesco Francavilla are bringing the zombie apocalypse to Riverdale with spectacular results. Against all odds, Archie and his gang of ageless teens are putting their teeth, so to speak, into the oversaturated genre of zombie horror. It’s a mash-up for the ages.

The story is familiar. Due to a combination of Reggie Mantle’s douchebaggery, the witchcraft of Sabrina the teenage witch, and a character’s love for her dog, the zombies are rampant in Riverdale. A major character is zombified in the first issue, and no parent, pet, or manager is safe. Archie’s classic setting of a Halloween dance kicks off the action, as the characters soon struggle to find refuge, see if their parents are still alive, and distract themselves from the nightmare with an impromptu party at the swimming pool at Lodge Mansion. Almost every character has a moment to shine, including Archie Comics’ first gay character, Kevin Keller; the creepy twins Cheryl and Jason Blossom; and the Lodge butler, Smithers, who never looked so Alfred Pennyworth-y. As the series progresses, Archie Andrews improbably becomes the Rick Grimes of Riverdale.

The art is an absolute eye-opener, as Francesco Francavilla kind of creates completely new versions of the characters while retaining their essence. As Francavilla has shown in The black beetle (which he also writes) and his art batman ’72 (which must be a series now), he’s mastered the combination of cartoonish style and pitch black obscurity. Betty is still Betty and Veronica is still Veronica, but it’s not the Riverdale you know from those little supermarket summaries. The cheerful, vivid colors of a typical Archie comic book are gone, as Francavilla’s palette of oranges, grays and purples creates a dreadful vibe. It’s as if the living dead have sucked the color, as well as the life, out of Riverdale.

Writer Aguirre-Sacasa, recently appointed Creative Director of Archie Comics, has managed to strike a balance between horror and humor. In Life after death, The Archieverse dynamic, which is surely part of the collective subconscious at this point, serves to escalate the horror while adding comedic relief and, oddly enough, relativity. For example, when the ever-arrogant Veronica Lodge is about to die, she doesn’t scream like a damsel or think “That would be a good death” like Frank Miller’s Batman. His first thought is that this death would not be worthy of a Lodge. Her second thought is that her nemesis Betty will finally have Archie to herself. As for the last regrets, these are quite funny and, dare I say, typical. I doubt that many people’s internal near-death monologue will earn them a Nobel Peace Prize. On my deathbed, I’ll probably regret not playing more pinball or eating more nachos.

And I’m especially impressed with how poignant this series can be – yes, poignant. I almost cried twice reading number 4, and I know of at least one other adult who had the same reaction. It’s a heartwarming and moving series, mainly because Aguirre-Sacasa and Francavilla have a formidable understanding of the essence of horror, which isn’t scary monsters, but the fear of loss. Nothing is more terrifying than the potential death of your parents, your pet, your best friend or your two longtime loves. Looking at The walking dead, I am numb by the number of endless bodies. I think Daryl’s death is the only thing that would make me blink. But in Life after death, the stakes seem significant.

Somehow, by mixing two totally unreal worlds – Archie Comics’ eternal teens and the undead monsters of zombie horror – Aguirre-Sacasa and Francavilla have created something real on the plane. emotional.