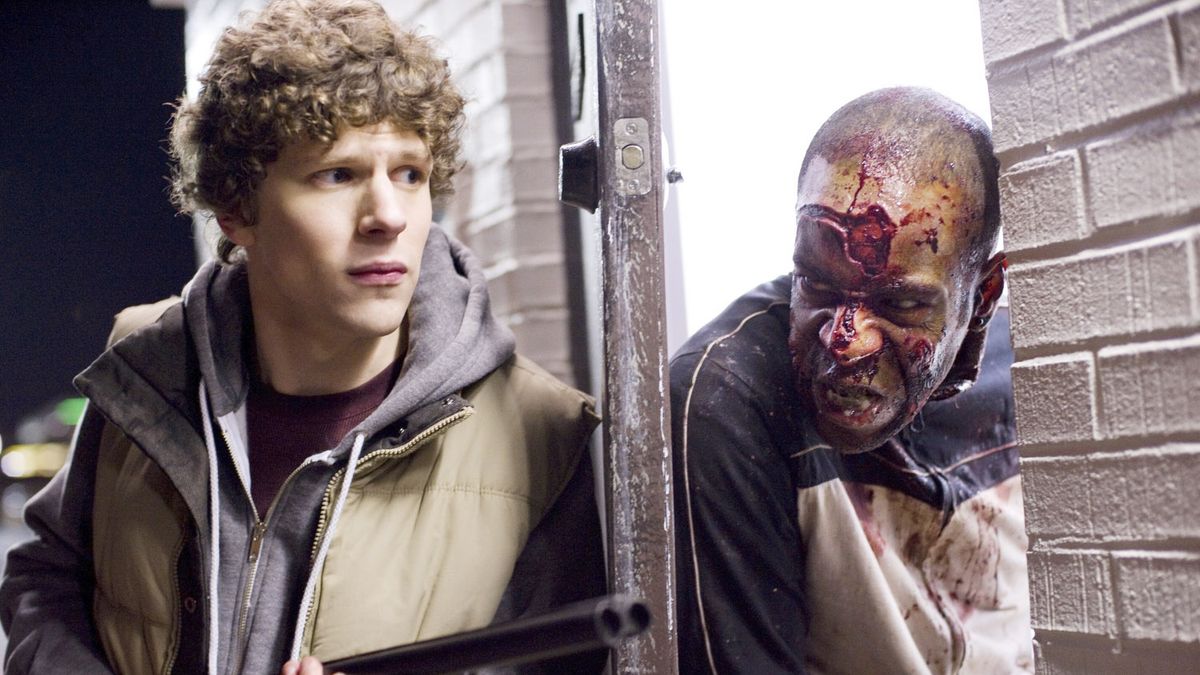 What really sums up the phrase “a fate worse than death”? Becoming a zombie is what. The horror one has to face after receiving a fatal bite from a socially inept trotting corpse with the mannerisms of a pissing raccoon is far worse than dying. The fear of death is somehow overcome by the fact that you will swallow your friends and family in moments. It’s all rather unpleasant.

No matter how repulsive the semantics, these frothy-mouthed hordes continue to plague our most popular forms of entertainment. We can’t get enough, can we? While there are plenty of books, TV shows, and comics featuring zombies, let’s face it. These are the films that explore the threat of returning to life as a ravenous ghoul with such expert dread. So come on, join us, in celebrating the 25 greatest zombie movies ever made.

Oh, that in the bowl? No, it’s not popcorn. It’s braaaaaaaaains!

The Zombie Movie: When zombie pioneers George A. Romero and John Russo parted ways, the latter continued to create this. This splatter-tastic comedy goes completely against Romero’s direct approach, turning instead to his own world when a couple of warehouse workers accidentally release a toxin that turns people into zombies. A bloodbath ensues.

Why it’s great: Have you ever wondered why every time someone tries to do a zombie impression, they immediately start yapping about “braaaaaains”? Return was the first of its kind to incorporate zombies’ love of gray matter into undead mythology.

The Zombie Movie: Tommy Wirkola thought the zombies themselves weren’t scary enough, so he chose to mix them up with one of history’s nastiest parties – the Nazis. This horrifyingly graphic tale winds its way through the Norwegian mountains when a group of students stumble upon a horde of resurrected soldiers.

Why it’s great: Jet black comedy courses through her veins, but unlike her contemporaries, that doesn’t mean she’s holding back on her guts. Or should we say braaaains.

The Zombie Movie: Loaded with awful reviews upon release, this later became a cult classic. Story-wise, it follows a young plantation worker who retracts from the time she “walked with a zombie”. Does she actually meander alongside a member of the undead? Or is the supposed zombie just low on health? You decide.

Why it’s great: A tense little thriller that’s all the scarier because you don’t even see zombie flesh eating.

The Zombie Movie: This 63-minute German entry into the zombie canon is an underrated masterpiece. Forget character studies and nuanced drama. Rammbock captures all the intensity and scares found in higher octane fare and packs it into a concise story that follows a young man trying to get his girlfriend back just as the epidemic hits .

Why it’s great: Traces of some of The Walking Dead’s most compelling episodes can be felt throughout, especially as it weaves together love and loss through a tumultuous time.

The Zombie Movie: A modern take on old-school movies from Romero’s era that features just two main characters – a US Army engineer and a local soldier – The Dead is a mostly dialogue-free affair. The pair navigate the arid and inhospitable terrain of an unnamed African town in order to survive a series of zombie attacks and reunite with their families.

Why it’s great: Shifting the action from the typical suburban locations to the remote African desert makes succumbing to a bite even more terrifying. Who can you turn to for help?

The Zombie Movie: Juan Carlos Fresnadillo’s sequel ramps up the vigor and intensity, diving into action territory for the continuation of Danny Boyle’s story. Beginning with a searing opening sequence, it traces the experiences of Robert Carlyle’s Don and quickly descends into a terrifying nightmare.

Why it’s great: The heartbreaking realization of what Don does during the first scene torments him throughout the story, and instead of giving him the chance for a happy ending, the story retaliates. About the woman he left behind in a house full of zombies. It’s a relentlessly brutal comeuppance.

The Zombie Movie: In this 60s classic from Hammer, a sleepy Cornish town comes under attack when a strange and unknown disease begins to infect the inhabitants. Soon the dead begin to rise, but luckily the town doctor hires an old professor to help keep the resurrected townspeople from gnawing on their neighbors…

Why it’s great: A pivotal moment in Hammer’s history, it introduced the idea that zombies weren’t just ghosts with a different agenda, but rotting flesh, as evidenced by its gruesome effects. Later films in the genre would be inspired by this portrayal of the walking dead. Oh, and it features a killer resurrection scene.

The Zombie Movie: A clever script takes this 2008 Canadian film to new ground, following small-town radio DJ Grant Mazzy over the course of a day as residents begin to show signs of infection and the town of Pontypool is quarantined. This strange epidemic is not due to a mutated virus, but to speaking English. So Grant’s entire audience was wiped out.

Why it’s great: It’s full of social commentary, attacking the exhausted zombie trope with aplomb by blaming our collective feet: humanity’s bored and uninspired chatter is responsible for this disease. It is only when we assign new meaning to words that we can escape their clutches. Better take the OED then…

The Zombie Movie: Laughs abound in Ruben Fleischer’s comedy horror that picks up sometime after a zombie outbreak with high schooler Columbus (Jesse Eisenberg) en route to Ohio in search of his parents. Along the way, he meets Tallahassee (Woody Harrelson), Wichita (Emma Stone) and Little Rock (Abigail Breslin) and the foursome fly off to find a safe haven…

Why it’s great: As Scream made for slashers, Zombieland knowingly tackles the day-to-day logistics of surviving a zombie apocalypse to winning effect.

The Zombie Movie: Horror maestro Lucio Fulci unleashes a whole world of pain in New York City. The day after the suicide of a priest, the gates of hell open and it is up to a journalist and a medium to close them. As time passes, hordes of the undead cross the threshold, making it harder for the fearless pair to save the world.

Why it’s great: It’s Fulci. There are barrels of not just outright gore, but also inventive and playful riffs on typical horror shows. Maggots rain down and one unlucky guy gets impaled on a lathe.