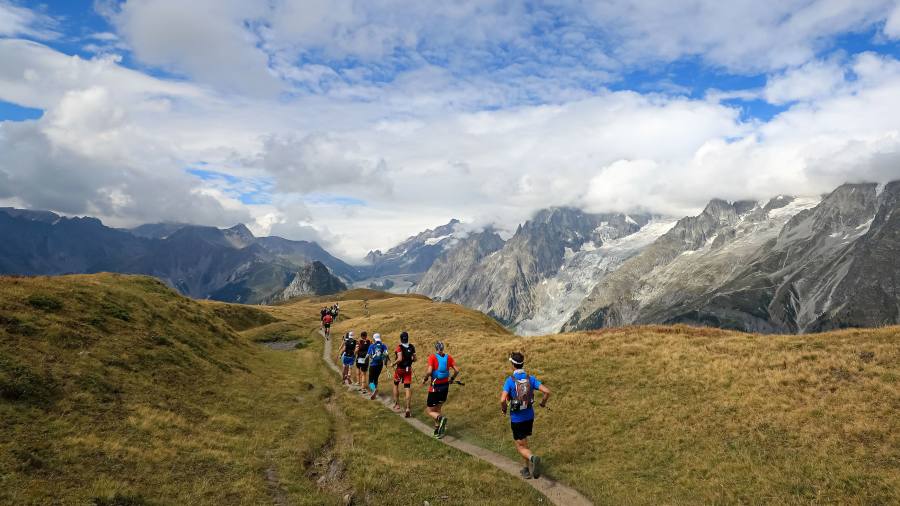 There is, in my opinion, no more inspiring mountain location than the French town of Chamonix, which perhaps explains why, a year after following the world’s best ultra-runners around the highest peak in the Alps as a spectator, I found myself at the Ultra-Trail du Mont-Blanc for my own 100km race.

Interest in ultra-running – broadly defined as any running race over 50km – has exploded over the past decade and the UTMB has become the de facto world championship. Founded in 2003, initially as a 106-mile (171 km) race around Mont Blanc, the event has evolved into a week-long festival that attracts major sponsors and some 10,000 runners across eight different races, now broadcast to millions of fans around the world. .

Ultra-running, by any definition, is a strange business and the mountain variety can seem particularly cruel. My race, the CCC, is equivalent to almost two and a half marathons and includes 6,100 meters of breathtaking ascent over treacherous alpine passes.

Launched in 2006 as a shorter version of the original UTMB, which normally takes place the following day, the CCC has become one of the most prestigious races in the sport in its own right – a sought-after challenge for ultra-runners around the world who complete grueling qualifying races and then enter a lottery to secure a coveted spot.

The result this year, at 9 a.m. on the last Friday in August, was a sea of ​​nearly 2,000 skinny runners in the latest ultra-trail fashions — psychedelic caps, skin-tight running bags and futuristic shoes — squeezed onto a tree-lined avenue in the picturesque Italian ski resort of Courmayeur.

The name comes from the three mountain towns the race connects – Courmayeur in Italy, then Champex in Switzerland and finally Chamonix in France. Locals describe the CCC as a “U-turn” around the famous mountain. The fastest runner, a 28-year-old Swede sponsored by Red Bull called Petter Engdahl, completed the course in a record time of nine hours and 53 minutes. For most, it would take more than double.

Classical music filled the air as the organizers counted us down. Then off we went: a crowd of runners from 83 countries meandering through the narrow streets of the city like a herd of colorful wild horses.

As to why people would choose to run through the mountains for a hundred kilometers only to emerge at the finish, almost a day later, hungry and broken, I still can’t be sure. In Christopher McDougall’s 2009 bestseller, Born to run he argued that the ability to run long distances was a defining characteristic of human evolution. At times during the CCC, I could see his point of view.

Leaving Courmayeur at the head of my wave of runners, I felt euphoric. The pretty streets of the town turn into a stony track and then a series of narrow switchbacks, climbing more than 1,000 meters over a handful of kilometers to the first pass, the Tête de La Tronche, about 2,500 meters from altitude.

At the top, I looked back to see a trail of runners zigzagging up the mountain from the valley floor, united in their crazy purpose.

As the race progressed, over five more major climbs, through stunning Swiss villages and into the dark hours of the night, the moments of euphoria became rarer and the suffering set in.

I took mental notes as I ran to remember the highs: the taste of fresh spring water in a small hamlet on the descent of the 2,537-metre Grand Col Ferret; the sight of a majestic wooden cross in a clearing on the hillside just past the halfway point; the jolly French family with a Dalmatian dog who cheered me on to the penultimate aid station around midnight.

The depressions were easier to remember: a grueling 700 meter ascent to the Franco-Swiss border after 70 km when we had already climbed more than 4,000 meters; the sand that got stuck in my elbow after putting my tired feet on uneven ground and falling for the first time; the guttural sound of an exhausted runner moaning in the dark.

In the first half of the race, I checked my watch regularly and quietly celebrated if I passed another runner. In the second half, miles and position lost their relevance and I just focused on the hypnotic rhythm of putting one foot in front of the other.

They say ultra-running is as much of a dietary challenge as running because you’re trying to replace the calories you’ve burned. At each refueling—seven in total—I filled my water bottles and looted the platters of charcuterie, cheese, fruit and chocolate laid out by the volunteers. The plain penne pasta served half way tasted divine. Coca-Cola has developed a new revitalizing power.

When the lights went out and the headlamps came on, I had been running for 12 hours and the race had entered its most surreal phase. Descending in darkness to the Swiss town of Trient, the forest seemed to come alive: shadows moved like people, trees turned into animals.

Now the aid stations looked like triage tents in a war zone, where zombie runners tended to injured feet and stuffed chunks of food into hungry mouths.

On the final climb, climbing 600 meters up another set of switchbacks to a plateau north of the finish, I only saw the square meter in front of my feet. Leaning over my hiking poles, I watched beetles and earwigs scurry beneath me as I climbed and climbed.

And suddenly there it was: the bright lights of Chamonix stretched across the valley floor.

I was still over an hour from the end but I now felt lighter as I ran through the rocks under a starry sky. The first few meters of the descent on beaten legs was excruciating, but as I got closer the pain of the 100 km faded and before long I was flying through the city. I crossed the line around 3am after 5:45pm, 476th out of 1727 runners.

Did I enjoy? It’s hard to answer. Would I do it again? Absolutely.

Entrance to the CCC (utmbmontblanc.com) costs €189. To participate in the draw for a place, riders must complete at least one UTMB World Series race of 50km or more (the system is weighted so that the more qualifying races a rider has completed, the more has a chance of winning a place thanks to the draw). For next year’s race, riders must complete their qualifying races and register for the lottery by December 31. The draw will take place on January 10, 2023.

Tom Wilson qualified by completing the Ultra-Trail Snowdonia race in Wales in July; he was the guest of the UTMB Group.