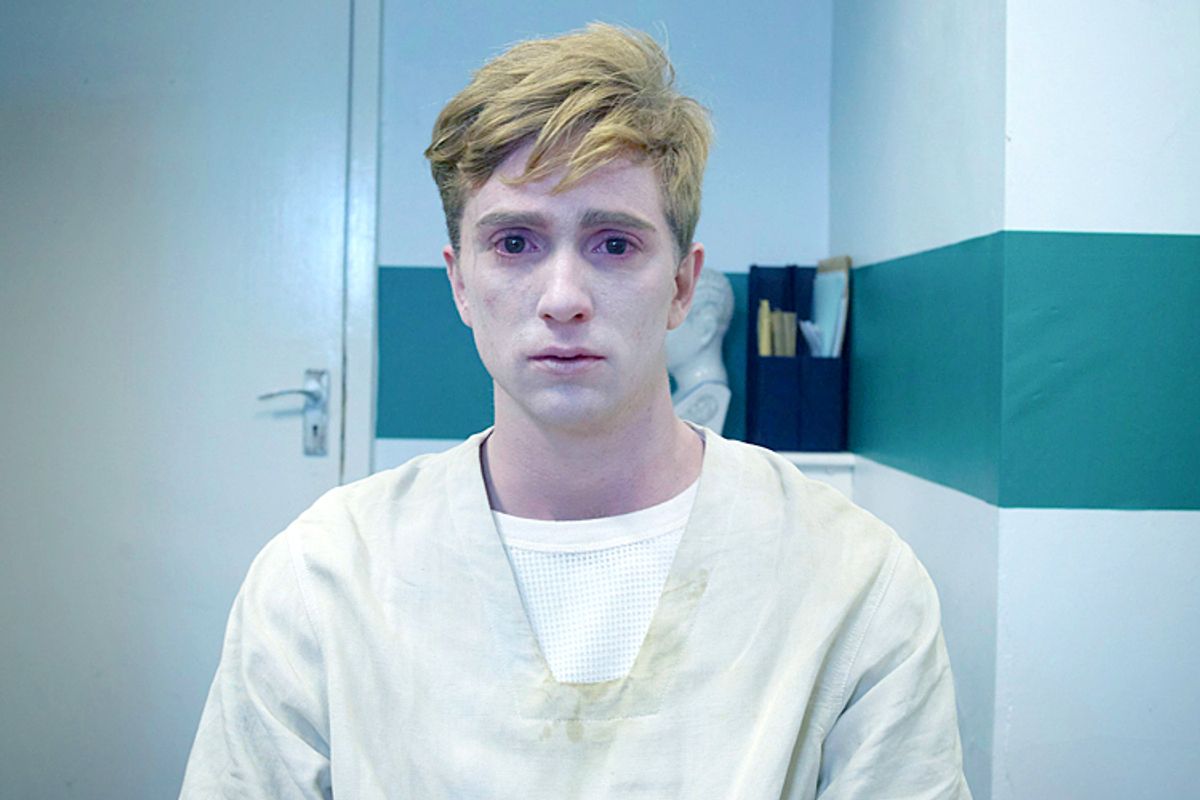 I don’t know how close you are to zombie saturation point, but I’ve pretty much had my fill of amazing, dumb monsters trying to stock up on braaaiiins. So it was with some reluctance that I started watching “In the Flesh”, a three-part zombie series starting to air on BBC America tonight. After the first scene – the walking dead putting a girl’s brain in their mouths in the aisle of a supermarket – I felt pretty satisfied with my zombie dismissal. Then came the second scene. Kieren Walker (Luke Newberry), pale as death and with bizarre zombie eyes, talks to a doctor about his horrific flashbacks – of sticking a girl’s brain in her mouth in a supermarket. Kieren is a zombie who has been cured.

“In the Flesh”, which starts off strong and gets even stronger, is set in England after the zombie apocalypse. In its particular mythology, all those who died in 2008 are resurrected one day. They terrorized and ate people but could not multiply: their bite did not have a bite. A cure was finally found, and with daily injections, the former brain eaters got their brains back. These are people with the “partially deceased syndrome”, still in their janky, but otherwise cohesive body, and they are slowly returning to the families and communities they once terrorized.

Kieren comes from a small town called Roartan, which was a particular hotbed of zombies – also called rotten – hate. It is home to the Human Volunteer Force, a militia that rose up as the British Army had its hands full in London, and its residents continue to rally to proclaim that they will not accept anyone with PDS in their city. Kieren’s mother and father pick up Kieren, a sensitive and guilty 18-year-old from the rehab center, his skin made up, his brown lenses in, and have to hide him in the house; it’s not safe outside. It’s not much better inside, where Kieren’s little sister, HVF member Jem, walks around with a gun hating him, and his parents ask him to pretend to have dinner – the zombies don’t. do not need to eat – rather than talk about how it has changed.

That’s a great premise: zombies as a metaphor for immigrants or any other despised, ostracized and threatened minority. The first episode explores it fully, ending with a brutal and overwhelming sequence that also has Holocaust valences. (Later, in a bar, ex-zombies are told they must drink – which they cannot do; “My insides are particularly decrepit,” proclaims one particularly lively person with PDS – in a separate area .) was the second episode that really blew me away. If you hate spoilers, you should stop reading here and watch the rest for yourself.

“In the Flesh” explores an aspect of zombie lore that doesn’t really matter at the height of a zombie apocalypse. Zombies, the first anyway, are dead people, and not necessarily other zombie bites. Everyone with partial death syndrome has died from something – cancer, heart attacks, car crashes – and now have a second chance at life. They can be disfigured and damaged, but they are also in a strange way resurrected: the most cursed suddenly become the most saved. Kieren, however, committed suicide. He’s alive again, even though he really wanted to be dead. His coming home is complicated not only by the fact that he was once a zombie, but the fact that he was once a suicide. His family is angry with him not only for chomping his brains out, but for leaving them. It’s a psychodrama that could be a spectacle in itself, only this one is zombie.

To make matters even more complicated: Kieren committed suicide because her hidden boyfriend, the son of Roarton’s most outspoken and hateful fanatic, left for Afghanistan and was killed. The city’s reluctance to accept Kieren as a person with PDS reflects its inability to accept him as a gay man. The zombie metaphor becomes literal: zombies aren’t just As ostracized minorities, this particular zombie has already was an ostracized minority. It is only now that he is undead, that he will learn to continue living. Instead of another zombie story, â€œIn the Fleshâ€ is a suicidal, gay, and post-zombie story. Go see.