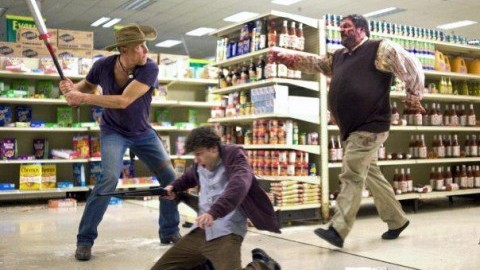 Movies that attempt to make viewers scream and laugh rarely seem to do well. Few filmmakers have managed to synthesize horror and comedy into a single dynamic entity that doesn’t rely on excessive amounts of crude humor to disguise their lack of originality. Comedy zombie movies may prove to be the most underrated genre of all time due to their limited success in infusing humor into a post-apocalyptic setting.

However, beneath the wreckage of an infected film genre remain a few outstanding survivors.

“Zombieland” embodies the true spirit of a comedic zombie movie by incorporating the irony of finding comic relief in a death-ravaged society. The story features Columbus (Jesse Eisenberg), who finds himself an unlikely survivor given the opportunity to experience a previously only recognized hero complex through Xbox.

The offbeat monologue, the unlikely partnership of painfully adolescent Eisenberg and gun-toting Woody Harrelson, and the wonderfully random but satisfying appearance of Bill Murray put “Zombieland” at the top of the list. Abigail Breslin delivers an excellent performance as the only child character while delivering some of the film’s rougher lines. An ingeniously developed set leaves the viewer wondering whether the real danger lies in the hordes of brain-hungry zombies or the terrifying idiosyncrasies of the remaining human survivors.

“Dead Snow” chronicles the fate of a group of friends whose trip to a lodge in the mountains quickly turns bloody when they accidentally awaken the fallen army of zombified Nazis.

While the film’s plot is action-packed in a steady stream of near-death experiences and limited dialogue, sudden bursts of humor throughout its soundtrack and story set it apart from its competition. The Norwegian film features a tasteful cast of blood and guts that highlights some particularly ingenious wounding methods, including a ball of yarn-style denouement of small intestines clinging to a tree branch.

“Shaun of the Dead”

“Shaun of the Dead” combines British stereotypes with a zombie-infected setting to create a comedic masterpiece. Shaun (Simon Pegg) and his best friend, mother, drunken stepfather, ex-girlfriend and hipster rival find themselves trapped in an English pub by a mob of zombies, resulting in a hilarious attempt at survival. Penelope Wilton delivers a particularly memorable performance as Shaun’s mother, nailing the transformation of a soft-spoken British woman into a killer member of the undead.

“Warm Bodies” is the edgy paranormal romance that “Twilight” wasn’t. Set in the abandoned airport of a post-zombie apocalypse, “Warm Bodies” tells the endearing love story of R (Nicholas Hoult), a zombie who saves the life of a human named Julie (Teresa Palmer). After eating Julie’s boyfriend’s brain, R becomes her protector against an army of hypothalamus-starved creatures. The two quickly develop a relationship through an awkward exchange of grunts, stunted communication, and imploding sexual tension between the living and the dead.

Unlike most films in its genre, the film develops the unique concept of reversing the zombie infection through love and willpower, setting the stage for a philosophical debate about what makes us truly human.

“Pride and Prejudice and Zombies”

“Pride and Prejudice and Zombies” retells the classic Jane Austen novel with guest appearances from among the walking dead. The film finds its humor inherently as the search for a husband continues throughout the apocalypse. The Zombie War is thus woven together effortlessly, allowing the plot to unfold fully with a few additional dramatic elements. Comic justice is served as 18th-century high society women with guns stuffed in their bodices pull up to clear a zombie infestation from the ballroom.

Lucy Matzilevich can be contacted at [email protected]