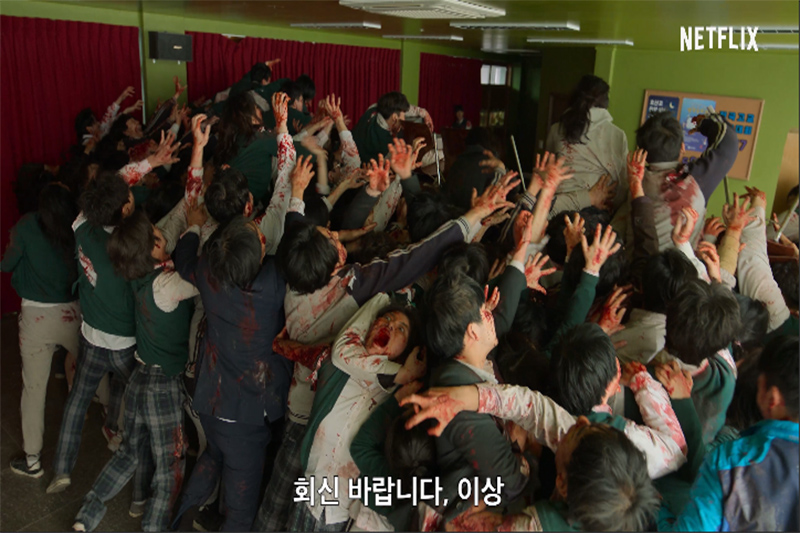 Streaming giant netflix released a trailer on Friday that previewed the new Korean series “We are all dead.”

The trailer that encapsulates the ensuing suspense of the zombie outbreak clearly depicts the chaos that hits Hyosan High School after a mysterious zombie virus breaks out.

“The zombie horde is growing rapidly and spreading through classrooms, the cafeteria, and the schoolyard, reaching every corner of the school,” the synopsis reads.

Cheong-san and his friends have found themselves completely trapped and desperate to rescue, but no one believes the zombie outbreak is real.

The students see that the help is not coming while the whole connection has also been lost. They later realize that “only we can save ourselves”, and decide to fight the zombies any way they can.

The goal is to find their way out of school while ensuring each person stays alive. Having lost their friends, teachers, and refuge overnight, would these kids be able to counter the zombies that were once their friends and escape the school safely?

“All of Us Are Dead” directed by Lee JQ and Kim Nam-Su and written by Chun Sung-Il is based on the Naver webtoon of the same title. The webtoon was created by Joo-Dong-geun.

Here are some photos from the thrilling zombie series:

“All of Us Are Dead” premieres on Netflix on January 28. —Rosette Adel