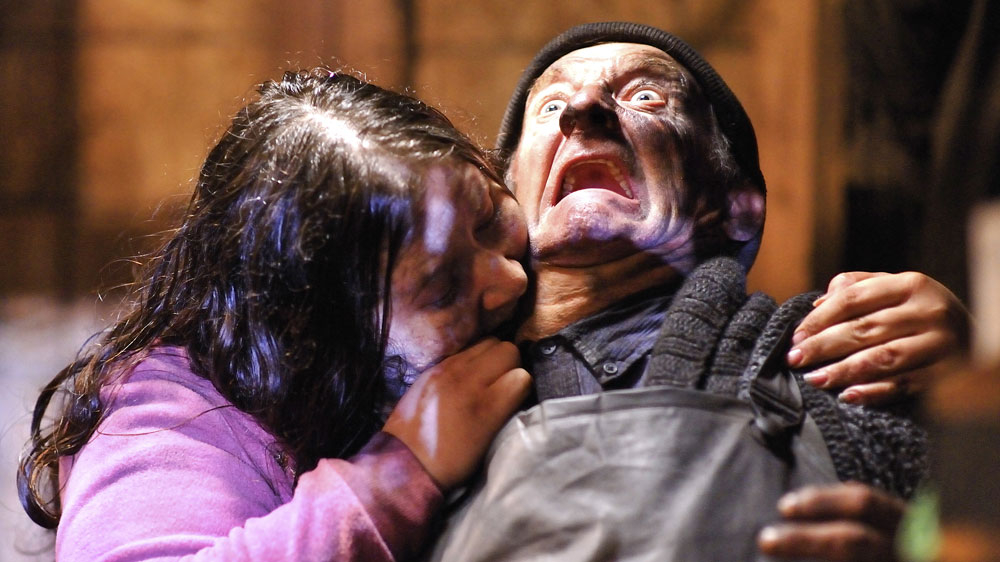 Once bitten: Amid a growing zombie apocalypse, islanders like Tawdry (Wayne Robson, right) struggle to control the inhabitants.

Survival of the Dead by George A. Romero

“My name is Patrick O’Flynn”

“Who keeps them chained?”

Since his 1968 zombie classic night of the living dead brought a seismic change to the horror landscape, director George Romero’s “Dead” movies – now totaling six in all, not including an unofficial zombie-like entry in Crazypeople — have become a case study in how genre films can comment on the times, smuggling in subtext to issues that straight dramas are reluctant to tackle head-on. Scratch the surface and find a withering satire of consumerism (1978s dawn of the dead) or a criticism of the arrogance of Green Zone (2005’s land of the dead) or, more recently, an attack on media-generated lies that doubles as a portrait of the YouTube generation (2007’s Diary of the dead).

With his new release, however, the restless inspiration that brought previous incarnations of Romero to life is starting to feel more like a force of habit. Although it is a more beautiful and smoother operation than Diary — who was too happy with his sloppy DIY aesthetic — Survival of the dead is a zombie zombie movie, roaming the countryside without a thought in his head. If there is any subtext here, it would take a lot of searching to locate it.

As a twist on the subgenre itself, the film presents an intriguing idea – what if zombies could be persuaded to feast on something other than human beings? And if their behavior can be changed, then can they also be redeemed? – but fails to follow through.

Pick up where Diary leave behind, Survival of the dead shifts focus to a handful of rogue National Guardsmen who were peripheral characters in the previous film. With humans dying at an accelerating rate – 53 million every year, not counting the suicides and murders that stem from the chaos – the soldiers, led by Sgt. “Nicotine” Crockett (Alan Van Sprang), seeks refuge on a small island off the coast of Delaware where the “dead heads” are said to be under control.

Once there, Crockett and his motley crew find themselves in the middle of a clan war between two Irish patriarchs with different ideas on how to avert the zombie apocalypse. Patrick O’Flynn (Kenneth Welsh) insists that every dead, infected person shoot him in the head to make sure they don’t join the ranks of the living dead. His biblical counterpart Seamus Muldoon (Richard Fitzpatrick) believes in the possibility of redemption, so he experiments with keeping the undead in chains, waiting for a cure while trying to wean them from their flesh-gnawing tendencies.

There’s a lesson to be learned from this Hatfield-McCoy feud, something about the failures of humans to unite in a common cause, even when it’s against a grave threat to the species. But while you scratch your chin over the idea, Romero deals with light-hearted banter, overheated (and terribly acted) family melodramas, and ever more inventive ways to smash the sweet melon out of a zombie’s skull. In the past, the director has usually had an irreverent response to the issues of the day; Survival of the dead This is the first time in the series that he doesn’t seem to bother looking for one.