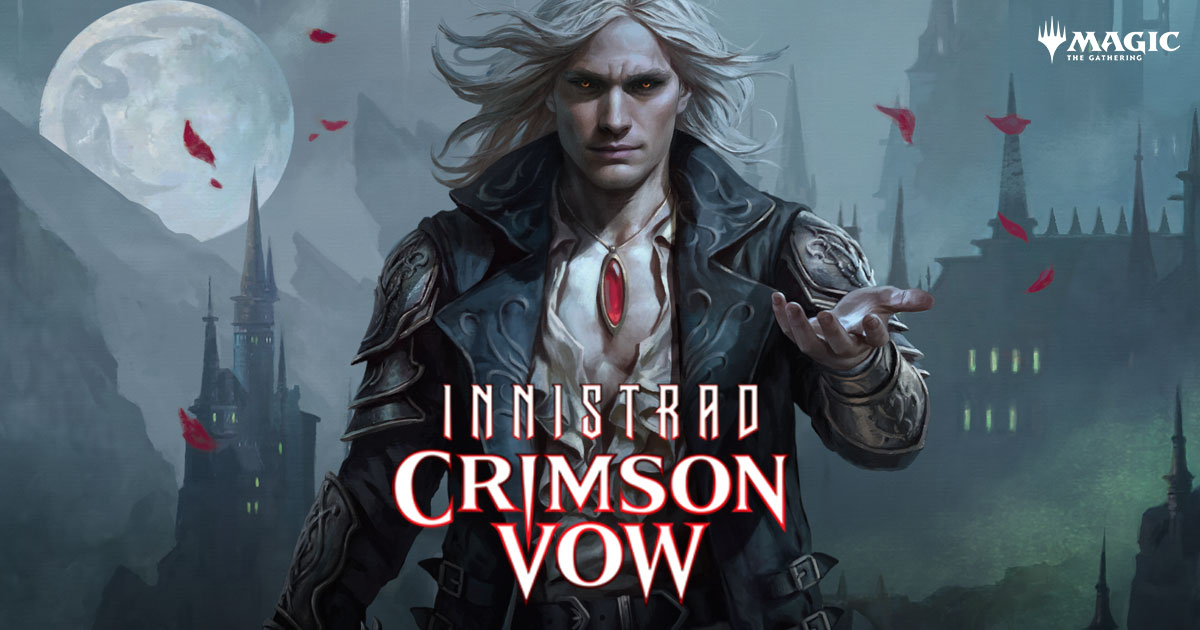 Innistrad: Midnight Hunt has been part of Standard for barely a month now, but it’s already time for us to prepare for the release of its partner set, Innistrad: Crimson Vow. The first set focused on the werewolves of Innistrad’s plane, but Crimson Vow will instead focus on vampires, and specifically the wedding of an original Innistrad vampire: Olivia Voldaren.

Official map previews will begin this Thursday, October 28. In the meantime, MTG lead designer Mark Rosewater has released a collection of Crimson Vow teasers on his blog. Rosewater has a tradition of writing a list of things players can expect to see in a set just before the preview season begins. Today we have some interesting takeaways from Rosewater’s post regarding Crimson Vow:

As always, MaRo’s teaser is full of interesting details about the set – including wild counters and creature types – but there are a few things in particular that caught my eye.

Delete something that has never been deleted before?

One of Rosewater’s bullet points says there will be a new mechanic that “removes something that’s never been removed before.” Players on Reddit joked that we’ll finally be able to “remove the target player from play”, but it’s unclear what Rosewater is actually referring to. One possibility that comes to mind is emblems, which are usually created by planeswalkers such as Wrenn and Seven.

Emblems are well known as a card type that are currently not interactable with by any means in-game once they have been created. It’s certainly possible that emblems are what Mark Rosewater was referring to here, so maybe that’s about to change. Planeswalkers often need to earn significant loyalty before they can create an emblem with their “ultimate” ability, which is known to be quite difficult in a game of Magic. If there are one or more cards that can drop emblems, it will be interesting to see how Wizards of the Coast balances niche ability.

There are many cards that have been printed in Innstrad’s sets that could be considered “popular and powerful,” from Thalia, Guardian of Thraben to Emrakul, the Promised End. With such a provocative hint coming from Rosewater, it’s tempting to think it might be referring to Snapcaster Mage, an immensely powerful creature who has seen competitive gaming in every format it’s been legalized in.

It’s probably a long shot, but it might not be crazy to think that Wizards would print Snapcaster in Standard. After all, they just printed Delver of Secrets in Midnight Hunt after Mark Rosewater gave us a similar hint in the previous teaser. It’s also possible Rosewater is talking about something like Craterhoof Behemoth, a staple in HRE and a player in other formats as well. We won’t know for sure until spoiler season begins, but I’ll definitely be keeping an eye out for a reprint that fits that description.

The design team at Wizards of the Coast has put a lot of effort into Artifact Tokens over the past few years. Throne of Eldraine brought with it Food Tokens, the newest of the bunch. Treasure Tokens have made an appearance in many recent sets, especially Adventures in the Forgotten Realms, and Innistrad: Midnight Hunt recently saw the return of Clue Tokens to the Standard format.

Now we’ve learned that Crimson Vow will apparently include cards that create a new type of artifact token along the same lines. There’s no end to the kinds of things an artifact could theoretically do: Food tokens gain life, maybe there could be a token that deals burn damage? Maybe there could be some sort of equipment token? A commenter on Reddit suggested it could possibly have a life drain effect (opponent loses 1 life, you gain 1 life).

Regardless of what the token actually does, these artifact tokens are popular among players and have also become an important part of Standard and other formats. We’ll have to wait and see what the function of the new tokens will be and if they can live up to the legacy.

A returning mechanic from one of Ravnica’s factions

Rosewater also says a mechanic will return that “first appeared as a faction mechanic.” The factions referred to are almost certainly the guilds of the Ravnica plane, whose names have also become the go-to titles for color pairs in Magic (Azorious, Boros, Dimir, etc.).

There were nine first sets that took place on the Ravnica plane, and they all featured the factions in one way or another; that leaves us with no shortage of mechanics that Rosewater could potentially refer to. Based on Innistrad vampire lore, as well as existing Midnight Hunt vampire mechanics (which were certainly designed with Crimson Vow in mind), some players speculate that the mechanic in question could be Bloodthirst or Spectacle.

Bloodthirst was first associated with the red/green Gruul clan, but the name holds true in flavor, and +1/+1 counters have often been associated with Vampire cards in Magic’s past. The show also makes a lot of sense, especially since it comes from Ravnica Allegiance’s black/red Rakdos clan. Black and red are usually the primary colors of Innistrad vampires, and the story fits perfectly with Olivia Voldaren’s macabre wedding idea – it’s sure to be a spectacle.

And a zombie catapult?? …Or something

There’s a lot more fun stuff in the Rosewater teaser, including a legendary character who will return as a vampire, a creature with “Sepent Egg” types, and more. One of my favorite nuggets is that there will be a card that says “Zombies you control have flying”. Alright, so maybe it won’t be a zombie catapult, but you gotta admit it would be cool!

Be sure to check back with us this Thursday when spoiler season kicks off with a livestream on the MTG Official Twitch and Youtube channel starting at 9:00 a.m. Pacific. Our spoilers page will be kept up to date with the latest Crimson Vow spoilers as we collect them from around the web, so check back regularly once previews begin.

What do you think of MaRo’s teaser for Crimson Vow? Do you have any guesses as to what some of the more enigmatic hints might be doing? Let us know in the comments, and we’ll see you on Thursday!