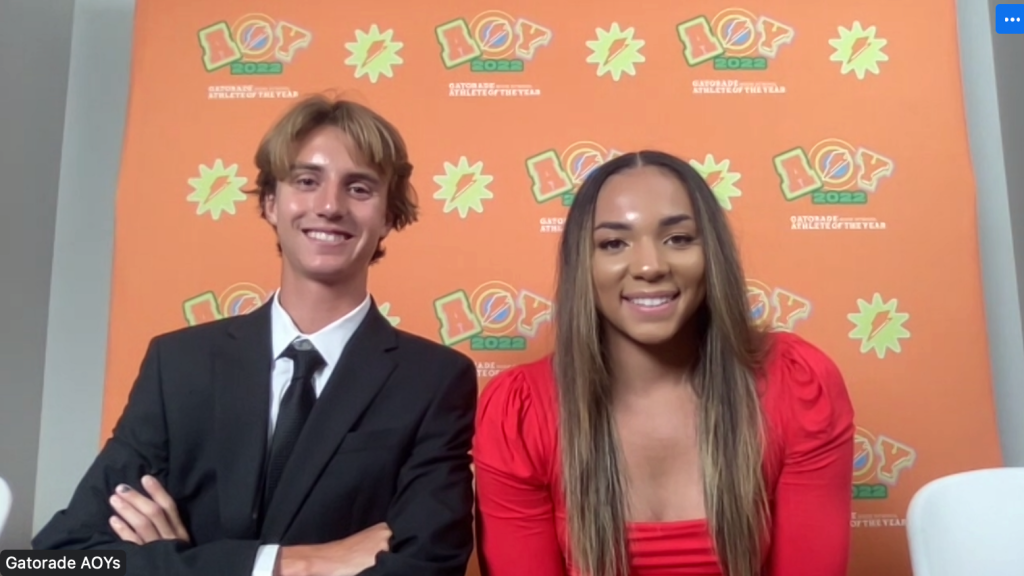 After announcing the individual sports winners in each state, Gatorade named its best of the best. On Tuesday, Kiki Rice and Colin Sahlman were named Gatorade Athletes of the Year.

During Rice’s four years at Sidwell Friends School (Washington, DC), she helped grow the women’s basketball team into an unbeatable group. She led the 30-0 Quakers, who went undefeated and won the State Champions Invitational, a season in which Rice averaged 15.8 points, 7.0 rebounds, 5.1 assists and 2 .6 steals per game as a senior.

She was named co-MVP of the McDonald’s All-American Game and played on the gold medal-winning FIBA ​​U18 Americas U18 national team.

Sahlman will run at Northern Arizona University next season while Rice will cross the country to play basketball at UCLA.

They finished their high school career on top, with championships and recognition as Gatorade Boys and Girls Athlete of the Year.

Following the announcement, USA TODAY High School Sports participated in a Q&A with the two athletes focusing on sports, classroom, community service and icebreakers to get to know each other. The answers are below and have been slightly edited for clarity.

Q: Congratulations on being named Gatorade Athlete of the Year. Was that a goal for one of you?

Sahlman: Certainly, of course. See my teammate [Nico Young] getting it two years ago kind of motivated me to try to get it this year.

What is your best high school memory?

Rice: From a sports standpoint, I would say one of them would definitely win the national championship last year with my high school team. My freshman year, we started [the season] off, and we were definitely not nationally ranked. We weren’t even winning our league. And now being a national champion, playing on ESPN, was a huge moment of growth and I was super proud of where we were.

Sahlman: Pretty much the highlighted memorabilia that I can think of are athletic accomplishments. It was just non-stop. My fondest memory would be winning the Running Lane Nationals last year with my team. We went 1-2-3-6 for our front four and it was just cool to share that with them. Having the top three riders in the country on the same team was pretty cool.

What are your favorite subjects at school?

Rice: My favorite subject is history.

Sahlman: My favorite class I took was a photography class my sophomore year.

What are your favorite karaoke songs?

Sahlman: I don’t do karaoke (laughs).

Rice: I’m not a big fan of karaoke either, but maybe “Free Mind” by Tems.

Sahlman: I’m not really a great musician, I don’t know.

If there was a movie based on your life or career, who would play you?

If there was a zombie apocalypse, which three professional athletes would you want on your team?

I’m surprised you didn’t just go with your teammates and run away from the zombies.

Sahlman: You said professional athletes! I would choose my brother. My brother is crazy. … It’s an animal.

What are three words to describe your style on the track/court?

Sahlman: I should go with fearless, determined and passionate.

Is there a charity or cause you are involved with or would like to get involved in later?

Rice: One group I work with is SportsMom Foundation, a local charity in Washington, DC and the DMV area. It’s a charity that helps serve disadvantaged minorities, black girls, basically have access to training and basketball equipment and helps fund AAU teams because these are very expensive. It’s something I donated the money we got for winning the prize.

Sahlman: I’m not currently part of a charity, but if I were to join, it would be animal shelters. I’m a huge dog lover, animal lover so if I had to help out with anything this would definitely be it.

If you could give your younger self one piece of advice, what would it be?

Rice: I would say get out of my comfort zone a bit and take some risks. Don’t be afraid to fail.

Sahlman: I wouldn’t say anything to my younger self. I have motivated myself all these years. I developed the character that I am today. I would just let him make the same decisions as me and be that person.