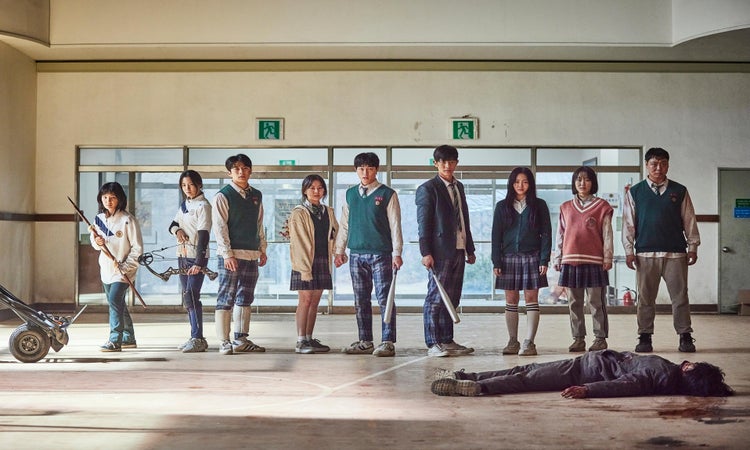 Editor’s note: Minor spoilers for “All Of Us Are Dead” ahead.

The Korean zombie series “All Of Us Are Dead” is set in a post-COVID-19 world.

In episode six, On-jo’s father, a firefighter and first responder, mentions this when talking about the time they might have to spend in quarantine due to the mysterious nature of the disease. “It was nine days for MERS, two weeks for Corona and even three weeks for Ebola.”

The 12-episode series, which is Netflix’s first Korean original offering for 2022, treats the zombie outbreak in the fictional Hyosan area as an epidemic. Based on the popular webtoon by Joo Dong-geun, the live-action follows high school students who find themselves at ground zero of a mysterious virus that turns its hosts into flesh-eating monsters.

Yoon Chan-young portrays high school student Lee Cheong-san in “All Of Us Are Dead.” Photo by YANG HAE-SUNG/NETFLIX

As the nimble zombies roam the halls of the school (and later, the rest of the city) in search of flesh to feast on, the students figure out how to get out alive and the authorities struggle to find answers. It’s stressful, yes. But as you keep watching, you realize that the stress also comes from that premise so close to home.

In her 2018 video Polygon about zombies, video producer Jenna Stoeber revisits “a fundamental truth about horror” and, by extension, zombie media: “it reflects the crises of the culture in which it is created.” . In the world of ‘We’re All Dead’, there’s talk of ‘martial law’, ‘quarantine’ and ‘getting tested’ as the military scrambles to find a solution to the outbreak – terms that, before the pandemic, I would have just glossed over the assumption that nothing like this could ever happen in real life. Two years since it all started, and these words have new meaning in a world still suffering from COVID-19. It hits especially differently after I watched it just days out of self-imposed quarantine after suffering a mild bout of said disease.

During the press conference broadcast live from Seoul on January 26, director Lee JQ told reporters that he chose the project because of its setting (most of the action takes place in the confined space of the school) and because the main characters are students who are not yet mature adults.

“We often say things like ‘some adults are childish,'” he said. “I felt it would be extremely interesting and intriguing to examine the choices these young adults make. And I felt like it might give new meaning to the zombie genre.

And it’s true that the characters of “All Of Us Are Dead” are what makes the series so endearing. While most of the fresh-faced actors already had a number of acting credits to their name, the series marked the first time they took on lead roles — and smashed them.

You can’t help but support the students of Hyosan High School because of how they represent very real student archetypes and the nuances that come with those roles given the context. There’s the average but reliable boy next door (Cheong-san, played by Yoon Chan-young) who secretly has a crush on his best friend (On-jo, played by Park Ji-hu); the over-achieving but quiet and intimidating class president (Nam-ra, played by Cho Yi-hyun), and the reformed jock-slash bully with a quirky quirk (Su-hyeok/”Baresu”, played by Lomon).

You can’t help but cheer on the students of Hyosan High School because of how they represent true student archetypes. Photo by YANG HAE-SUNG/NETFLIX

In his Polygon video, Stoeber also pointed to the wave of community-centric zombie media, such as “The Walking Dead” and “The Last of Us.” The stories addressed by these games and shows reflect the growth of their creators; a movement towards the safety of a family community and how the characters find their role within it.

That’s where the rest of the cast comes in: this show wouldn’t be what it is without the school’s other main actors, especially Cheong-san’s classmates: the stubborn but lovable Gyeong -su (played by Ham Sung-min), clumsy but resourceful megane (boy with glasses) Oh Joon-yeong (played by An Seoung-Kyun), the singing-loving class clown (Dae-su, played by Lim Jae- hyeok), team player Wu-jin (played by Son Sang-yeon), best friends Ji-min (played by Kim Jin-yeong), and Hyo-ryeong (played by Kim Bo-yoon). There’s also plenty to be found in the second group of surviving students led by seniors Seung-lee and Eun-saem, along with juniors Ho-eun and Han-yeol.

On the other side of things are the characters you learn to hate with a passion. Yoo In-soo is terrifying as the Gwi-nam school bully. Lee Yoo-mi, who Netflix viewers might know from her role as Ji-yeong in “Squid Game,” shared how she worked hard to make her character Na-yeon as boring as possible. She would ask Sung-min (who plays Gyeong-su) questions like “am I bothering you enough?” or “Am I getting on your nerves enough?”

One thing the series translated directly from the webtoon was the uncensored and unfiltered side of South Korea. Boiling, gut-wrenching, bloodthirsty zombie imagery aside, you can tell this drama wasn’t meant to be visually pleasing. Located outside of Seoul, the usual shots of gleaming skyscrapers are replaced by the grit of apartment buildings. The coloring of the show is not changed to embellish, and the actors are made up in a way that shows their imperfections, which makes them look convincing as high school students. They also swear a lot (rare is a scene where a character doesn’t utter an iteration of “sibal”, a common Korean profanity comparable to the English “fuck”).

Chun Sung-il’s script condensed and blended around the originally slow-paced webtoon plot. The first two episodes have launched, featuring cinematic action shots, intense stunts, and all the blood and gore director JQ deemed essential to immerse both cast and viewers.

During the press conference, the cast also shared that the slow and detailed zombie transformation process is something to look forward to. Like in “Kingdom” and similar Korean zombie shows and movies, the zombies in “All Of Us Are Dead” are fast. In a behind-the-scenes video, it’s shown how a dancer and actor choreographed all of the zombies. They were so terrifying that actors In-soo and Chan-young even revealed that they threw up on the first day of practice due to the intensity.

At the start of the series, the characters already recognize that their classmates have turned into zombies, with Cheong-san asking everyone if they’ve seen “Train to Busan”. Once this is established, they do everything they can to find help. As if going through the levels of a video game, the group goes through several stages using ordinary objects like desks and cleaning equipment combined with skills acquired as they go – taking refuge in the classrooms , the broadcast studio, and the science lab inside the school, among other locations – to work your way up to the rooftop.

Holding on to the hope of surviving without depending on adults or authority figures is a major concept the director wants to emphasize in the series. When students realize that survival is up to them, it’s heartbreaking. The tears and frustration they displayed during those times were so tangible. You can really feel the exhaustion of looking back at all that has already been done, all that has already been lost, and the frustration of thinking that there seems to be no end in sight. As we approach the second anniversary of the very first lockdown announcement in the Philippines, these are very real emotions that resonate more given the current situation we find ourselves in.

As the show tries to tackle issues of morality and justice, as well as the concept of losers and winners, corruption and school violence over its 12 episodes, some of these deeper meanings come to life. lose in the story. After all, that’s a lot to unpack for a show where emotions are constantly running high, and the fact that it’s all happening while these characters are fighting for their lives doesn’t help. Hopefully that’s something they can fix if a second season is announced.

Sure, “All Of Us Are Dead” is an entertaining show to binge on and even come back to. But if there’s one thing director Lee JQ wants viewers to take away from the show, it’s this: “No matter what happens in a school, there are perpetrators, there are victims. This is exactly what is happening in our society as well. Sometimes, due to the selfishness of a particular group, others are victimized and hurt.

As this country approaches the turbulent waters of the next few months, I hope this is something we take seriously.

All Of Us Are Dead is now available on Netflix.